Dog lovers get ready for my dog loving story. Ever since I was a baby in my mom’s stomach I had a dog name Mozart he was a very special dog to me he would always go gently close to my mom and lay his ear gently on her belly to hear me I guess. He and I had a strong relationship when I was born and for the first time I came home he would always watch me. When I started walking he would always help me if I fell down. One day I was walking on this wall and I fell he started barking and barking when my mom finally came down he was trying to help me up. Mozart was a very special dog. I loved my dog so much, I was a strange and smart child most of the time when you bother a dog while its eating most likely it will bite you but Mozart and I were so close that I would play with him throwing him food and he would not even mind.

One day I was eating breakfast and my abuelo (Spanish for grandpa) told me to change the channel upstairs because since the TV upstairs controlled the one downstairs. As I was skipping to the stairs I saw Mozart in the house it was strange because he is supposed to be outside. I saw blood on the floor and all of the sudden my other dog Beethoven was chasing him I was sad and I hollered for my abuelo he came running to see what was my distress the dogs had a fight. I was on the top stair when my grandpa finally separated them I was scared I never saw a dog fight before, especially of my two favorite dogs. (Only two dogs) the first time my dogs fought was when I was a toddler because I wanted to play with Beethoven and Mozart did not want me to. Mozart was always there for me I remember when I used to lay on his back and we could play horse. Mozart was a very special dog to me, he would always care for me so much it was really impressive he was a very smart dog, the only thing he did not do was talk on the phone.

All dogs are scared of fireworks. I was scared so I took Mozart and Beethoven inside the house we played hide and seek and all sorts of games that I could play with a dog my dogs were so smart Mozart smile and he made funny sound he use to say “te quiero” which means I love you he was so smart it’s such a pity he died I don’t think I said a proper good bye to him. One morning in Miami and 8 year old girl named Kleys woke up and found out that one of the most precious things to her had died, Mozart at the age of 93 had died do to old age. He was so special to me still when I see or hear pictures of boxers I get sad I almost cry I loved him so much I can’t even think that he is dead. I remember all those times when we played together, ate together, cried together, smiled, sang, and when I talked to him I could feel like he actually cared and that he knew what I was saying but I knew he was there for me when I needed him I loved him so much that I don’t really talk about it but when I do it makes me happy that someone knows how special this friend is to me.

I love this dog so much every week end I went to my abuelitas house (grandma) I would play with the dogs when it rained was when my grandma’s sprinklers turned on so Mozart and I would go outside and shower in the rain. We were really crazy not to mention one time we found un alacran (an scorpion) and what Mozart did was get a stick and he squished it, I was so amazed that a dog killed a scorpion I think he had done it before because when I followed him he was taking the scorpion into a bag there was like three of them and he just walked away calmly. I was really surprised at his behavior maybe when he was small they trained him to do it maybe he was already in practice and knew all that he had to do I was amazed I just kept looking at the bag an when I was about to pick it up Mozart growled at me. 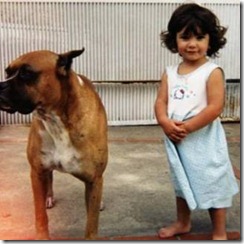