Versión del artículo en español
On Monday (23 February), below the burning midday sun in San Felipe, a small city west of Caracas, President of Venezuela Nicolas Maduro gave a rally before a crowd that filled little more than a block. The reason for the rally is still confusing, but it doesn't really matter.

Maduro can change the scene of his rallies, from the Palace of Miraflores to a dusty village street. He can oblige the national radio and television networks to transmit his words, or not. But he will always say the same; I face an economic war encouraged by the right, or I face an uprising encouraged by the right. In both cases the right will have the support of those who really pull the strings: the US government, or the empire, as he likes to call the Americans in the style of Chavez.

However, beyond his repetitive discourse, Maduro encounters a very inconvenient truth. According to the most recent economic surveys, more than 75% of the population don't believe in the economic war; on the contrary, they directly blame the current economic disaster, with its inflation, scarcity and shortages of key products, on Maduro and his government.

And the coup? The Venezuelan people see it as a joke, a bad-taste charade. Few people view the notion of democratic instability as a genuine threat. But Maduro's policies provide very real disenchantment; recently a poll called Hinterlaces found that seven in 10 Venezuelans think the country's situation is extremely grave.

It is with this panorama that Maduro – a limited politician, whose power was practically inherited, lacking in charisma and the authentic qualities of leadership – has opted to radicalise his style of government. And this has led to a simple, but terrible, recourse: repression. Insisting on the same strategy, the same shouting and the same threats, and causing despair through the inspiration of fear, is his only means of clinging on to power.

In his discourse in San Felipe, about the indifference of the US government, Maduro had no other option but to insult them with rude words. 'F****** gringos,' he shouted, hoping for an angry and extreme reaction from Obama. But the reaction did not arrive and, apparently, will never arrive.

While Maduro was dishing out insults in San Felipe, in a cell at the military prison of Ramo Verde (the prison in which the government holds its biggest enemies, such as Leopoldo Lopez, Daniel Ceballos and Raul Baduel as political prisoners), Antonio Ledezma, the prison's most recent inmate, wrote a letter which, after slipping past prison security, was soon made public.

In the letter, far from calling for mutiny, a coup or violence, the social democratic politician, who is currently Mayor of the Metropolitan District of Caracas, stuck rigidly to the constitution. 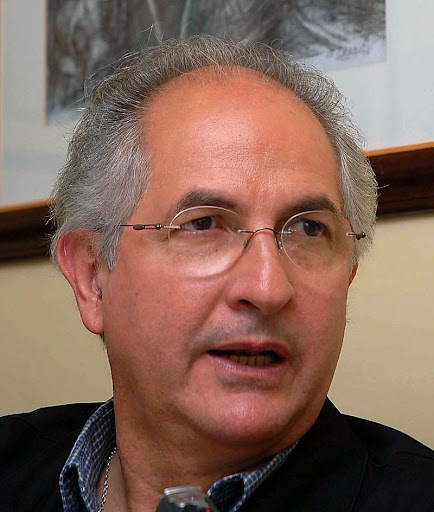 Antonio Ledezma now sits in prison with absolutely no justification.Wikipedia

"We must keep up the struggle in the street, in a civil manner with the constitution in our hands and with the truth in front of us" Ledezma wrote. "They [the government] have the weapons but we have the ideas to unite the Venezuelan people. Violence is a pointless vacuum that leads nowhere."

In another paragraph Ledezma, who was elected in two consecutive votes by overwhelming majority, defined his situation in the context of that of his fellow prisoners.

"With Leopoldo and Daniel, I am living through the injustice of prison ordered by a regime desperate to remain in place without popular support, which hopes to maintain power at the cost of the increasing deterioration of our country, whose people cannot escape the multi-pronged crisis of the economy, social, political and, especially, the pronounced moral crisis that challenges us to prepare ourselves to fight."

Ledezma brings together all opposition sectors, sectors which, exactly a year ago, found themselves divided and opposed. And for the political analysts this is the most important lesson: if it achieved anything, the imprisonment of Ledezma amalgamated, in a compact whole, the opposition leaders, independent of tendencies and differences.

But why did the government arrest Ledezma? For a curious and extremely shaky reason. They accuse him of having written and published a document, jointly signed by Lopez, Maria Corina Machado, and Julio Borges, that outlines a possible process of transition after the Maduro government. This word, 'transition' has become dangerous, unacceptable, even lethal to the regime. For this reason they kicked him out of his office like a criminal, handcuffing him between punches and shoves, shooting into the air to frighten his followers, without even a single judicial order to authorise his capture.

'There is no prison that can fit so any many people'

In no part of Ledezma's document can you find the word 'uprsing,' or at least anything that makes the smallest allusion to a violent end for Maduro. Quite the opposite: the document insists, to the point of excess, on respect for the constitutional text and the course of action it dictates for emergencies. But for a fading government like this one, someone who suggests ways it might fall, or simply requests the abdication of Maduro, is peddling subversive arguments that must be paid for in prison.

Logic dictates that, where Ledezma has gone, so Borges must follow. Borges is also a civil servant elected by power vote; he is a deputy in the National Assembly and national co-ordinator in Venezuela's principal opposition party, Primero Justicia [Justice First]. After him the focus will shift to Machado, also an elected deputy but already stripped of her seat by the arbitrary and unconstitutional decision of National Assembly president Diosado Cabello.

Without hesitation, Maduro could move on to target the principal leaders of all opposition parties. Others who could fall include academics, journalists, leading figures in civil society and, to its logical extreme, anyone who raises their voice vehemently against the government. The foreign reader will think that this is an aggression, however, all you need to know is that we have already had more than ten groups of 'twitterers' imprisoned for their opinions on social media.

Yet, in the same afternoon as the discourse on Maduro en San Felipe, Henry Ramos Allup, leader of the Democratic Action party, voiced the feeling of the entire opposition movement by saying to Maduro 'there is no prison that can fit so any many people.' 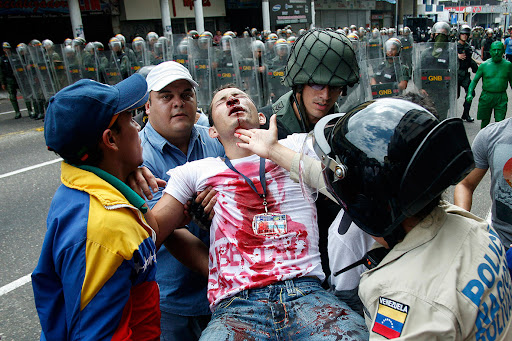 A punch-drunk boxer panting for breath

So concludes the month of February, which has actually been rather too long for the government's comfort. Barely two months in 2015 the exhaustion of the government is evident, like the boxer panting and without reflex who, in the final round, has only one lucky punch to hope for.

Maduro is betting on the impossible recovery of oil prizes in the short-term. The fear of the political cost of taking drastic economic measures (increasing gasoline prices or bringing the exchange rate into line, for example), leads to an absolute panic: this is a government which does not do what it has to do. A government which only takes refuge in the childish argument that it is victim of national and universal enemies who don't let it breathe or govern. In this way it accuses people of starting an economic war, a coup or the eventual murder of the president. Time ticks away and their only option, in desperation, is to increase the repression.

As I finish writing this article, the social networks – in a country where the majority of media are controlled by the government – are going crazy because of a terrible piece of news: in the city of San Cristobal, a teenager in the second year of his high school diploma has been killed in a student protest near the Catholic University of Tachira, an Andean province near the Colombian border.

A police officer who helped suppress the protest shot the boy in the head at point blank range. Photos show a school bag on his back, and his school uniform. The rest is blood, an enormous puddle of blood on the asphalt.