Crew Dragon's first critical flight test, known as a Pad Abort Test, is expected to take place this Wednesday, May 6, from SpaceX’s Space Launch Complex 40 (SLC-40) in Cape Canaveral, Florida. While the test is originating from the same launch pad we use for operational missions, this is not an operational flight.

This will be the first flight test of SpaceX’s revolutionary new launch abort system, and the odds of encountering delays or issues are high.  Fortunately the test doesn’t need to be perfect to be valuable—our primary objective is to capture as much data as possible as the data captured here will be key in preparing Crew Dragon for its first human missions in 2017.
1.  What is a Pad Abort Test?
A Pad Abort Test is a trial run for a spacecraft’s launch abort system (sometimes called a launch escape system). This system is designed to quickly get the crew and spacecraft away from the rocket in the event of a potential failure. It is similar to an ejection seat for a fighter pilot, but instead of ejecting the pilot out of the spacecraft, the entire spacecraft is “ejected” away from the launch vehicle.
2.  How is SpaceX’s Launch Abort System different than those of other spacecraft?
Previous launch abort systems have been powered by a rocket tower mounted on top of the spacecraft. During an emergency, the tower would ignite and essentially pull the spacecraft to safety. This works well while the spacecraft is on the launch pad and for a few minutes into ascent, but once the vehicle reaches a certain altitude, the system is no longer useful and must be discarded.
SpaceX’s launch abort system, however, is integrated directly into the spacecraft. This means Crew Dragon will have launch escape capability from the launch pad all the way to orbit.

Instead of a separate rocket tower mounted on top of the spacecraft, SpaceX’s launch abort system leverages eight SuperDraco rocket engines built into the walls of the Crew Dragon spacecraft.  The SuperDracos are capable of producing 120,000 lbs of axial thrust in under a second, which results in transporting the Crew Dragon spacecraft nearly 100 meters (328 ft) in 2 seconds, and more than half a kilometer (1/3 mi) in just over 5 seconds.
3.  What will the actual Pad Abort Test look like?
The graphic below illustrates the Pad Abort Test trajectory and sequence of events: 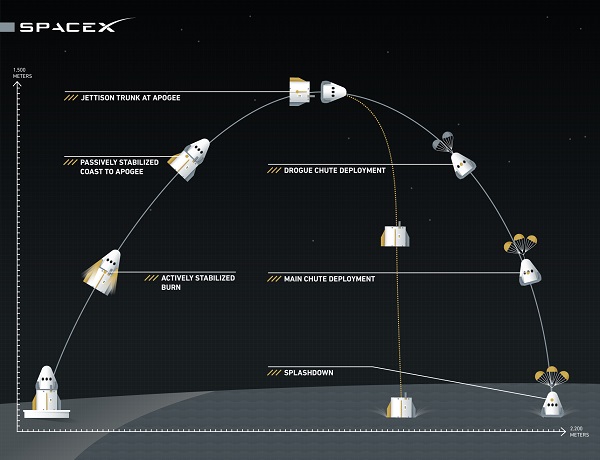 T-0:        The eight SuperDracos ignite simultaneously and reach maximum thrust, propelling the spacecraft off the pad.
T+.5s:    After half a second of vertical flight, Crew Dragon pitches toward the ocean and continues its controlled burn. The SuperDraco engines throttle to control the trajectory based on real-time measurements from the vehicle’s sensors.
T+5s:     The abort burn is terminated once all propellant is consumed and Dragon coasts for just over 15 seconds to its highest point about 1500 meters (.93 mi) above the launch pad.
T+21s:   The trunk is jettisoned and the spacecraft begins a slow rotation with its heat shield pointed toward the ground again.
T+25s:   Small parachutes, called drogues, are deployed first during a 4-6 second window following trunk separation.
T+35s:   Once the drogue parachutes stabilize the vehicle, three main parachutes deploy and further slow the spacecraft before splashdown.
T+107s: Dragon splashes down in the Atlantic Ocean about 2200 meters (1.4 mi) downrange of the launch pad.
Crew Dragon will accelerate from 0 to nearly 100 mph in one second. The entire test is less than two minutes long, with Dragon traveling over one mile in the first 20 seconds alone.
4.  What do we hope to learn from this test?
As the first flight test of SpaceX’s launch abort system, every piece of data we gather moves us closer to our first crewed flights in 2017.  At a top level, we are looking to demonstrate the overall effectiveness of Crew Dragon’s launch escape system, along with a handful of more specific objectives:
​Sequencing.  Demonstrate proper sequencing of the pad abort timeline—particularly given that several critical commands need to execute in very short periods of time.
Closed Loop Control.  Demonstrate the ability of the eight SuperDraco engines to respond in real time to incoming data in order to ensure Crew Dragon stays on the appropriate course.
Trajectory Data.  Obtain accurate trajectory data both for maximum altitude as well as distance downrange.
External and Internal Environments.  Obtain data on impact of various internal and external factors to Crew Dragon to help ensure safe conditions for crew transport.
5.  Will there be anyone on board during the pad abort test?
There will be a dummy on board the spacecraft, but despite popular belief, his name is not Buster. Buster the Dummy already works for a great show you may have heard of called MythBusters. Our dummy prefers to remain anonymous for the time being.

The purpose of the dummy is to collect data on the forces (gravitational loads) being experienced inside the spacecraft. This along with data gathered from the vehicle will help ensure crewmembers can withstand the environments seen during a launch abort.
What’s Next?
Pending the outcome of the pad abort test, SpaceX will then conduct an in-flight abort test. With the in-flight abort, we will test the same launch abort system, however this time in mid-flight during an actual launch. Both the pad abort and in-flight abort will be challenging tests, but the data gathered here will be key to helping develop one of the safest, most reliable spacecraft ever flown.
###
Publicado por marco antonio el 5.5.15 No hay comentarios: